What I did in my beeyard today

My beeyard at my house. 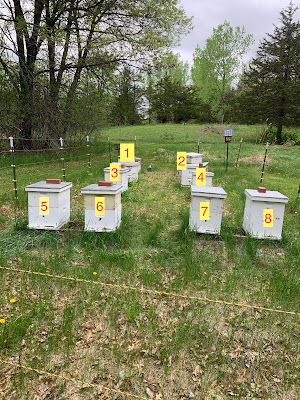 I went out to my beeyard to manage my five package bee colonies and three overwintered colonies. I had no one to run the camera so I will try to explain without being too confusing.
Hive 2, 5,6,7,8 were package colonies. All of the package hives were ready and received their second box. All of my equipment is drawn comb. I did have to feed hive 5.
Now the tricky stuff.
Hives 1 and 3 were overwintered colonies and were quite strong. Hive 3 had some capped swarm cells in the hive. So this is what I did.