The University of Minnesota Bee Class 2018. Welcome to the newest beekeepers in Minnesota. 240 students. 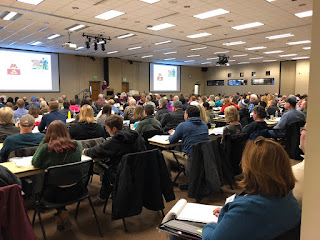 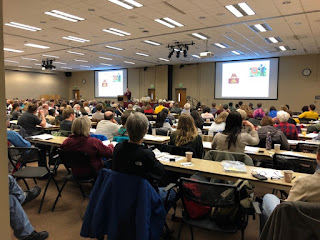 Looks like 40's on Wednesday. Good time to check colonies.
When it is above 25 degrees and not windy, it is not a problem to open a colony for a quick check.
What to look for: whenever you open a colony in the winter, having a plan on what to look for before the top is pulled off.

I was driving up near Finlayson this morning. I noticed a temperature contrast that was worth noting. Driving on I-35 the temperature was about 1 below in Forest Lake.
As I continued driving north the temperature was cooling off. By the time I got to the Finlayson exit, the temperature was 6 below. As I traveled west on Hwy 18 the road took a few dips. The temperature in the bottom of the dips was 14 below. As I came out of the dips the temperature rebounded to between 6 below and 9 below.
This is a good lesson when locating hives. Avoid low spots. Cold air runs like water. If a hive is in a lower spot and is surrounded by trees and brush. The vegetation will hold the cold air. If the brush was cut in a fashion that forms paths. The cold air can possibly leave and not settle in on frosty mornings.
Posted by Jim at 5:30 PM

What is happening in the hive right now.

The winter is moving forward, now it is early February and beekeeping spring is about 30 days away. Beekeeping spring is when we can feed pollen patties and syrup (if needed) to our overwintered colonies.
Right now the bee cluster should be up in the top brood box. The exception to this if your hive was very heavy with honey. The bees may still be in the lower box. But, for most of us the bees should be up. In most cases the queen has just started to lay a few eggs or will be starting very soon. The bees will be uncapping and consuming honey. When they start opening capped cells of honey, there should be pollen under some of the capped honey (if you did reversals on your colony last early June). The pollen will help stimulate brood rearing. If you don't think you have pollen under the cells in your hive, just solid honey, you may want to throw a pollen patty on, around Feb. 20th or so. If you did a reversal or two last spring, I would not put pollen patties on until early March.
Don't put pollen on too early, pollen patties can get the colony moving forward too fast. Putting pollen on too soon leads to increased consumption of honey and in some cases, results in huge hive populations in late April. This can lead to early swarming before queens are available for divides. Think about timing and what you did last year before putting pollen patties on. Once pollen patties go on, you need to keep them on through spring.
As we get into the start of brood rearing, this is the time when bees can starve if the weather gets cold.  This week is going to be cold, if the queen has started to lay, I wouldn't worry about starvation because of small amount of new brood in the hive this week. But anytime after the February 10th is around the time when most hives have brood in the hive. There won't be frames of brood, but one side of a frame will be getting eggs laid on it. Being it takes 21 days for brood to hatch, as time goes on, more sides of frames will start having brood on them as the queen starts increasing her egg laying.
Starvation can occur in February when there is brood present and we have weather that is near zero or below for three or more consecutive nights. The cold weather makes the cluster of bees contract to a tighter cluster. The tighter cluster is needed to maintain a 96 degree temperature over the brood. If the bees have consumed honey off the frame(s) of brood, the bees have to go to the honey that maybe a frame or two away from the brood. The brood can't move, so the bees have to move to the honey. When it is cold for several days in a row. The cluster  moves off the honey, to maintain the proper brood rearing temperatures. Moving off the honey for several days can result in starvation, even though honey is one frame away. This is the time of year when winter patties, candy boards or even granulated sugar on wax paper laying on the top bars of the top box can possibly prevent starvation. If the weather in February, is around the normal highs and lows, most colonies will be fine.
By the end of February, most hives will have a couple frames of brood in the hive. Maybe more if their population is large and they can cover and feed that large amount of brood.
Our hives are changing, soon it will be time to dust off that bee suit.
Posted by Jim at 8:39 AM