What is happening now in the hive

Right now the bees in most cases have moved into the top box. The queen is laying and there is definitely brood in the hive.
A beekeeper stopped by today to order some bees. He looked at his hive two weeks ago and they were alive. He did not check his available food stores. He checked his hives again yesterday and two of them had died.
He opened the hive to figure out what happened. On inspection, the hive was packed with bees. There were four frames of brood in the colony and the hive had starved. Unfortunate.
My colonies all had have big populations in them also. It would not surprise me if many other beekeepers are in the same boat. The easy winter has not been hard on the bees. Many colonies that have died, has been from Varroa or the consequence of Varroa, ie. viruses brought on by the blood sucking of the mite.
A beekeeper right now should be lifting the top box off the box below it to feel if it is heavy with food, light of food or somewhere in between.
If a colony is light on food, a feeder pail can go on. If a colony is heavy in the top box no feeding is necessary.
This weekend pollen patties can also be put on. When the pollen patties go on,  the hive brood production will start to increase. As the brood production increases the bees will eat more food stores. Pollen patties should be placed right where the bees are. The bees have to be able to touch the patty or they may not eat the patty. Leave the wax paper on both sides of the patty, it helps keep the patty fresh. A strong colony will eat a large pollen patty ( one pound patty) in about 10 days. It would not surprise me than an overwintered colony will eat at least four pollen patties by mid April.
Feeding syrup will also stimulate the bees to raise brood. Feeding syrup is a nectar flow to the bees.
There is one thing to remember when feeding overwintered colonies. Don't overfeed. Strong overwintered colonies will suck down the syrup. If a beekeeper feeds pail after pail of syrup. The bees will fill the brood box with syrup and the queen will have no place to lay eggs. When feeding overwintered colonies, just feed enough to keep them alive. If there is capped honey in the hive that is an indicator that they are storing food. If no capped honey is present, a colony could be close to starvation. If is a fine line we walk. But it always better to over feed a little than to under feed.
What we do now in late winter (syrup and pollen patties) will help build up the hive to a possible strong divide in May.
Posted by Jim at 7:31 PM

This hive starved recently. There was brood in the colony. Brood was capped so the queen was laying within the last twelve days.

Last week was very cold. That kind of cold can kill colonies in February. Beekeepers need to check their hives this week. What was alive a week ago, may or may not be alive today. There is still time to order package bees, but don't let the time get away from you.
The extended forecast looks like this is the end of the very cold weather.
Posted by Jim at 2:40 PM

The Almond bloom is starting in California. There are tens of thousands of acres of Almond trees in California. Northern California is one of very few places in the world to grow Almond trees. Almond trees start blooming in February and depending on the variety, may bloom into March. Over a million colonies of bees are needed for pollination. Beekeepers can receive up to $200.00 per colony to pollinate an Almond growers crop. If you do the math 200 x 1000 colonies= $200,000.00 for six weeks of work. It sounds like easy money but it takes work.

Payment is based on colony strength. Weak hives are paid much less than strong hives. Prices are based on frames of brood in a colony.
almond bloom 2016
The Almond bloom is critical for Minnesota beekeepers. We have Minnesota beekeepers in California pollinating the Almonds. Also, our bees come from this area. The pollen and nectar coming in from the Almond blooms stimulate bee colonies. Queens will increase egg production during this time. Large quantities of drones will also be produced. This increased hive production will be the package bees and queens coming to Minnesota/Wisconsin in April.
Where ever there is money to be made there are scoundrels pouncing on the hard working beekeepers. Thieves can make off with your bees.
http://www.nbcnews.com/business/business-news/bee-thieves-buzz-killjoy-almond-growers-n514956
Posted by Jim at 8:11 AM

I have used this woodpecker suet feeder for several years. This male Pileated Woodpecker, in all this time of watching, has never used this side of the feeder. There is another hanging feeder next to this one and I assume they did not like the obstacle.
They are big birds and come flying in like a 747. Amazing how they can move through the landscape. To give reference of the size, there are two suet cakes in the feeder. They are each four inches tall.
If you notice underneath the suet, the board hanging down. Woodpeckers need this to push off the feeder to get airborne. You can see the tail planted against the board. 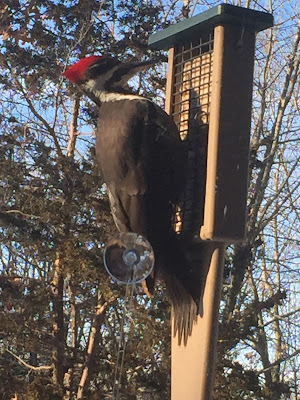 Sale on all winter patties

It will be cold through Friday this week. This is the danger time for colonies in the upper Midwest. Several nights near or below zero. There is more than likely brood in the hives now as queens probably have started to lay eggs.
Bees that are on frames with ample honey stores,  should be fine.
If the bees are on a frame that is depleted of honey stores, there is a possibility of starvation. Many beekeepers have put on candy boards with fondant, or winter patties. Hopefully adding this emergency food can get colonies over this spike of cold weather.
For now, it will be wait and see. A week from now, the 15th of February, the forecast high is finally near freezing around 30 degrees.  That will be the day to see if the hives have survived.
Long term extended forecast after this week, looks perfect for colony survival.

Looked at my bees this last weekend

I looked at my bees over the last weekend. Most of them are alive and looking very good. I did add more winter patties as they have been eating them up. Some of the hives are light on food and I hope to get them through the upcoming below zero weather that is on the horizon.

Master Beekeeper Bob Sitko has taught this class for 10 years. The nice thing about Bob's class is that it is over eight nights. It gives the students ample time to absorb and discuss beekeeping in detail.

We will now start having some regular hours in February.
Open Friday 9 am - 4 pm, Saturday 9 am - 4 pm.
If this doesn't work, call and make an appointment for another time.
Our hours will expand again in later February.
You can call us anytime if you have a question.
Posted by Jim at 3:03 PM