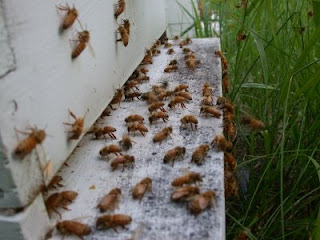 The bees have been busy even in Oct.

The 2008 season got off to a tough start. The cold weather in Feb. caused widespread starvation of overwintering colonies. Those that made it past the cold snap were in most cases pretty good shape. Being they had decent numbers I expected those to build up nicely.
Then the package bee delivery accident put beekeeping on hold for most of us.
The spring did progress weather wise pretty decent until mid April. The weather was cold and ugly until almost June.
Package bees installed in mid April had a tough time getting going, some didn't make it at all. My package bees that came in late April then again the first week of May had a tough time fighting the cold weather. Package bees could not build up with the cold temps and brood rearing was hampered affecting colony population.
Pollen and nectar production was delayed. The season seemed about three weeks behind.
Over wintered colonies did not build up well at all. Failure to provide pollen patties by beekeepers aggravated this situation even more. Overwintered hives that had the population and pollen did expand ok. But with the season being off by three weeks reports of swarming were coming in. Peak population when there is no nectar caused this problem.
The package bees also had their populations suffer. As the weather got warmer there still was no pollen. If the beekeeper stopped providing pollen patties the queen in many cases stopped laying. There again impacting the population.
Finally things finally improved around the third week of June.
The nectar flow seemed to start in this area around July 10. About three weeks late. My bees by this time were still building up from spring. The plus side, my swarming was minimal, the downside, the bees finally looked nice about the first of August. My honey production was down a bit but better than I expected.
The late spring seemed to benefit the late package bee delivery salvaging the season. Bees that did build up early had swarming issues.
Reports from other beekeepers was mixed. Some say this was their best year ever. Others no excess honey. If the Basswood flow is a normal source of honey for some, they were left empty handed because the Basswood flow was slim to none.
Going into fall now populations seem good. The late flows seemed to fill up my colonies for winter stores.
Posted by Jim at 11:46 AM

What I need to winter a colony of bees.

To bring a hive though winter we need the hive set up as follows.