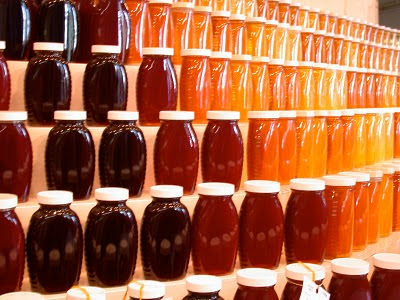 A good picture from the fair of Amber, Light Amber and White Honey

Congratulations to all the participants in the Bee and Honey competition.
Their participation helps showcase and promote the bee industry.
Jerry Linser also was the Sweepstakes winner in the bee & honey division.
Check out the results of all the winners:
http://www.mnstatefair.org/competition/results.html
Posted by Jim at 8:01 AM 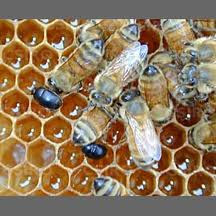 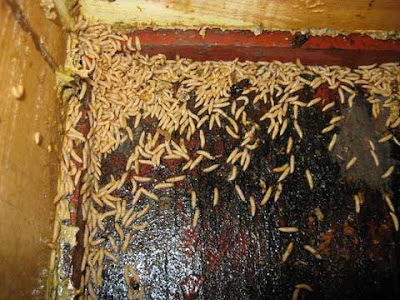 Beetle Larvae on a bottom board

I got a call from a beekeeper who claims he has some small hive beetle in some hives. He started the colonies this spring with packages. The packages did not have beetles. Now three weak colonies in his beeyard have beetles and beetle larvae. The beetle larvae start on a frame and will defecate and slime the frames. When the larvae are at the right age. They slither their way out the bottom board and drop to the ground. They burrow into the ground, pupate, and emerge as adult beetles and re-enter the hive. The bees in a weak colony usually will abscond and leave.
He was wondering where the beetles came from. I asked him if there is any commercial beekeepers near his hives. He said yes there are some commercial beekeepers near his bee yard. Many commercial beekeepers winter bees in Texas. Most states in the Southeastern U.S. all the way to Texas have the beetle. The beetles which can fly up to twenty miles, more than likely showed up one day and moved in.
Beetles can reproduce when the ground temperature is 50 degrees or warmer. This year the ground was warmer earlier and may caused beetles to start up earlier than normal. Beetles can survive the winter living in a cluster of bees.
How do we combat beetles? Keeping strong colonies, strong colonies keep the beetle from getting their larvae started. Don't have weak colonies or dead outs sitting in a bee yard. If a colony is weak put them in a smaller hive. If you notice beetles put in beetle traps. The traps are cheap and effective. There is also a ground drench that kills the larvae when they burrow into the ground to pupate. Treating for beetles in the spring is the best time because they are limited to places in the colony where they can be. This makes them easier to kill.
If colonies have beetles be careful when pulling honey supers and extracting. Pull the supers and extract them right away. Don't leave the supers sitting around for a long time. Beetles may have come with the supers and they may start laying eggs in a unoccupied super.
The hive beetle, eggs, and larvae are killed at refrigerator temperatures if there are no bees to keep them warm.
Posted by Jim at 7:39 AM

The nectar flow in mid Aug 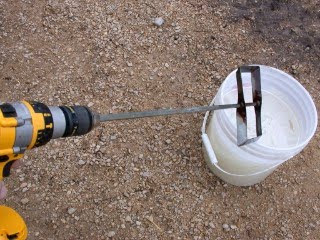 I use this drywall mud mixer to mix sugar syrup. When it is 2:1 the sugar is tough to get mixed in. Some hot water (not boiling) with the sugar mixed in liquefies quickly with this method.

I have really seen the nectar flow slow down in my area. Not much going in the supers. Goldenrod is blooming but I usually never see much of that honey around here.
Now my attention is pulling honey, feeding and mite treatments. Pulling my honey by labor day is usually my goal so I can treat for Varroa before it gets to cool for Api-Guard to be effective. It is not a bad idea to pull the honey by the last week of August, feed that week then treat with Api-Guard. Feeding early helps the bees shut down brood rearing early. By feeding into Oct & Nov. usually means there is brood in the colony as late as Thanksgiving or later. This late brood rearing makes a colony more inclined to starve in mid to late winter because the bees depleted their stores keeping the brood fed and warm into Dec. A hive in winter consumes about 12 to 14 lbs a month. If the bees eat 18 - 20 lbs in Dec and we have a cold winter, look out for the grim reaper.
Remember an overwintered hive needs two gallons of heavy 2:1 (2 parts sugar 1 part water) syrup with Fumigilan in the syrup to prevent Nosema in the spring.
Posted by Jim at 6:28 PM 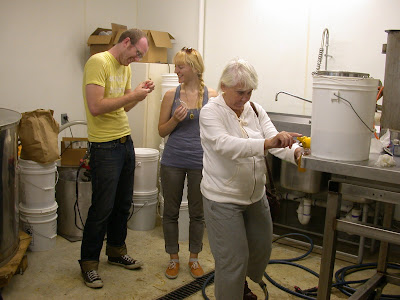 All the attendees bottled a jar of honey to take home. 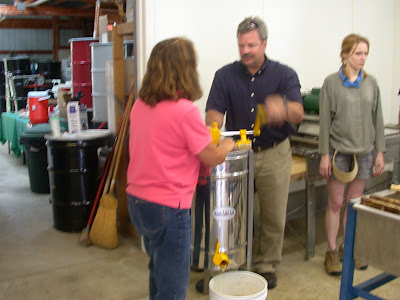 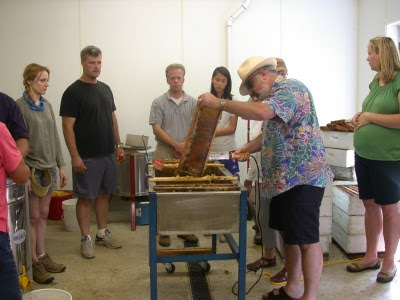 Uncapping frames of honey with a hot knife 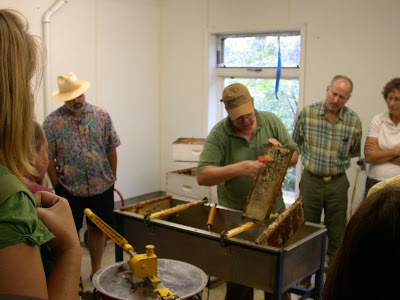 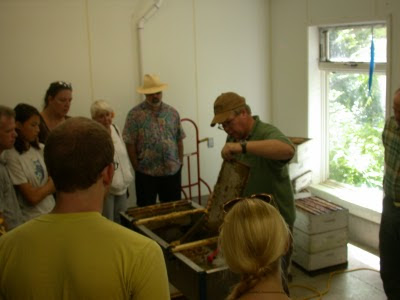 Getting a frame ready to uncap.

On Sat afternoon Victor Samelian and myself went and pulled about twelve supers of honey. We were using Honey Robber and fume boards. It was about 85 degrees and the Honey Robber was working great.
The honey was flying out of the frames on Sunday. We were all using the hot knife, capping scratcher, the three frame extractor, double sieve strainer, and bottling a bottle of honey.
Posted by Jim at 8:22 PM 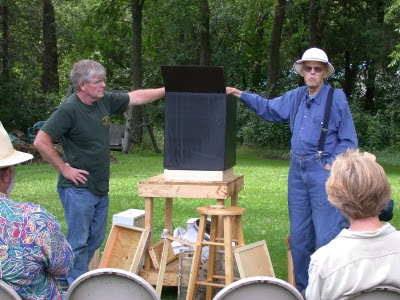 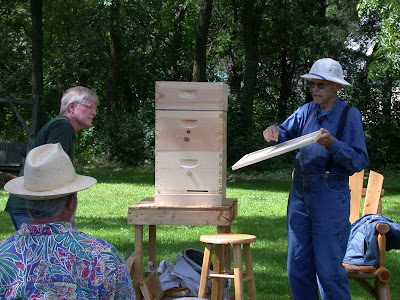 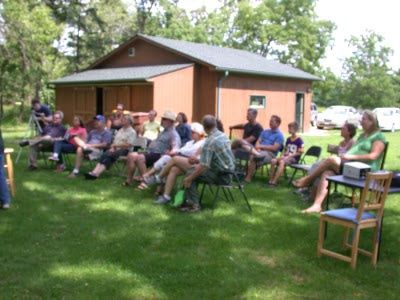 The beekeepers had a good show from two very knowledgeable beekeepers.
The other half was in the honey house. 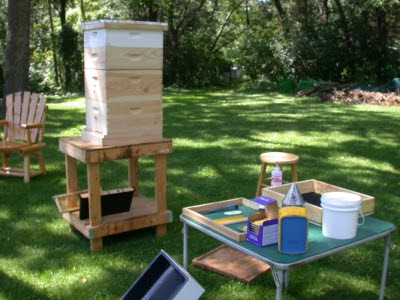 I would like to thank Master Beekeeper Bob Sitko and Beekeeper Warren Schave for sharing their knowledge and expertise with their fellow beekeepers.
Their explanations of how to proceed with the rest of the year will help all of the 50 attendees successfully extract, feed and winter their bees.
I also want to thank Mike Wybeirla for being the sound system roadie. The sound system helped everyone hear above the cool refreshing breeze.
Molly and Bobby were the parking Czars and Wendy made the refreshments.
Honey Lemonade, Honey Crinkle cookies, Honey Popcorn.
Posted by Jim at 8:03 PM

Past posts on pulling honey

Remember to search the blog. I have video's on pulling honey. Or you can see these video's on my youtube file. My youtube name is beefitter.
If you search youtube for beefitter video's you will find them there.
Posted by Jim at 8:40 PM

The nectar Flow in Aug

My nectar flow has been dwindling. I am planning on pulling my honey by the end of August and starting mite treatments at that time.
I won't be putting on anymore supers unless they are completely full. I am hoping the bees will fill up what is left and cap it over.
A couple of my hives haven't collected enough honey for wintering. The population has come back nicely but there is not enough food. I will start feeding these hives starting next week with heavy syrup (2 parts sugar:1 part water) so they have time to fill the top hive body with syrup and have time to convert it to honey.
If any beekeeper is planning mite treatments this fall most of the treatments available are heat sensitive to work properly. The daytime temperature has to be in the 70's for them to work properly. Pulling the honey off by the first week in Sept and putting on the mite treatments is important.
Posted by Jim at 8:49 PM

After getting many calls for queens lately. The culprit for the calls has been late season swarming. It seems that the warm weather, a little rain and fully mature hives equals a swarm. Most beekeepers haven't seen the swarms. But from checking their colonies have discovered no eggs. By rushing to judgment and wanting to throw in a queen can backfire. In most cases swarm cells produced a virgin queen that has to mature to a laying queen. This may take three weeks to a month before new eggs are seen again in the colony.
If a new queen is thrown in the hive without checking for an open swarm cell. The new queen that the beekeeper has plopped down 30 bucks for is quickly killed by the virgin queen or the bees in the hive.
The first thing I do if I have a queenless hive in July or August is take a frame of eggs from another colony(this is the reason to have two colonies). After about 5 days or so I stop back to look at that frame. If the bees have started to make queen cells on this frame it is safe to assume that the hive is queenless.
If no queen cells are being produced the hive is normally queenright but the queen has not started to lay yet. This works great also to buy time for the hive from turning to laying workers while the beekeeper figures out what is going on in the hive. A frame of eggs that will turn to brood then capped brood will delay laying workers from developing in a colony as long as brood is present.
Posted by Jim at 7:21 PM