This is the time of year that I make creamed honey for my holiday gifts. The creamed honey takes about two weeks to set properly. So getting it done by Thanksgiving, usually is enough time to set, by mid December. I usually make plain and cinnamon flavors. To make cinnamon, I use powdered cinnamon. No all powdered cinnamon tastes great with honey. Being we probably can't get a taste sample of cinnamon with COVID, but I usually use a Vietnamese cinnamon. The mixture is 1/8th cup of cinnamon per 10 lbs of honey. Usually I will mix in my seed first into the warm honey. I take a bowl of honey and mix in the cinnamon powder. This gets the cinnamon wet. When it appears that the cinnamon is saturated with the honey, I then mix the cinnamon mixture into the pail of honey. Stir the cinnamon in so it gets spread throughout the honey mixture. 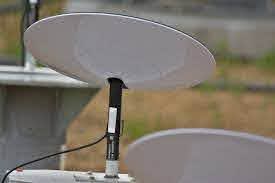 Winter is coming back

I just saw the weather, winter storm watch for tonight. 4 - 7 inches possible for Washington County. It may go east, that would be fine with me. Why would I push the snow onto my neighbors from Wisconsin? Because I have not finished my bee work yet. It got warm here recently and it has been a little too warm for an effective Oxalic Acid treatment. Plus I wanted to give the hives a few more days for any left over brood to hatch out.

My plan was to finish the treatment when our temperature become more seasonal. I have my battery charged for vaporizing Oxalic Acid. So I am ready. Now the plan is to treat on Wednesday, high of 45, looks like that is the day. I will be getting the treatments done and covering my hives and my last winter work will be done.

I have been invited to do a Zoom meeting for the Stillwater Bee Club next Tuesday. Topic is wintering, maybe discussion on some creamed honey. Could be that I am the only one left who hasn't completed their wintering, so my topic may be a moot point.

The shorter days are starting to show up on our daily Kilowatt collecting. In June we were getting 105 to 116 Kilowatts per sunny day. Now in November, shorter days but the nice blue sunny sky we have had these last few days, has moved the Kilowatts to 60 - 65 KW per day. Which is still very good. That is twice what a normal house in the upper Midwest would use (30 kw per day).

November and December are usually the cloudiest months of the year. So we are happy to be experiencing the sunshine. You can see in the pics here how the snow affected my garage and solar ground mount. 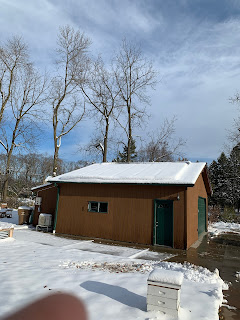 We had a 7 inch snowfall. Solar panels don't work when they are snow covered. You can see my solar panels on the roof of my garage. I did brush them off with a ladder and a long brush meant for solar panels. Then it took another four days for the snow to totally melt off the panels. 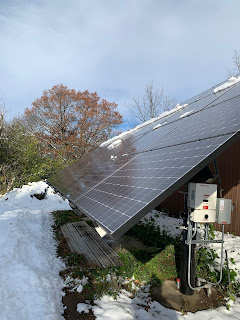 This is my ground mount solar array. I can change the tilt angle of the solar panels from season to season. When the snow storm hit, the panels were in their fall/spring angle of about 37 degrees. This pic was taken right after the snow storm. Most of the snow didn't even stick to the panels. If a person had a fixed, non adjustable solar panel array, this would be the desired angle to have year round. 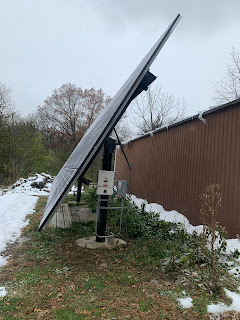 Here I have the solar panels at the winter angle of about 61 degrees for our Latitude. At this steep angle, unless it is a very sticky snowfall, I do not think the snow can stick to the panels at all. 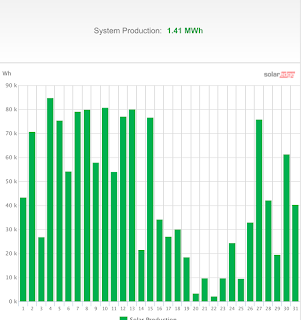 Here are our solar numbers for October. 1.41 MegaWatts or 1410 Kilowatts.

This upcoming week the temperatures will be in the 60's for highs. If there is some unfinished bee work to do, now is the time to finish.

Oxalic Acid treatments should be applied. Either the dribble or Vaporizer method work fine. Try to put these treatments on when it is around 40 degrees at the time of treatment. At that temperature, the bees are clustered and the treatments work much better than if applied when it is 60 degrees out.

Feeding: Don't feed for the sake of feeding. If your bees have enough winter stores, do not feeding the bees syrup. When the bees take down syrup, the colony will be stimulated and egg laying may start again. If a beekeeper feeds all week, there may be a big patch of fresh eggs laid. Now the hive will have brood in the colony probably into December. The bees have to keep the brood warm and will consume part of their winter stores to achieve this. Plus, by having brood in the colony, mites will move into the brood, increasing the mite numbers in the colony.

If you have to feed, do an oxalic acid treatment first, to knock down the existing mite population. Then feed as rapidly as possible. Best to use ProSweet so the bees don't have to dehumidify the syrup.

When the chores are done, cover the hives with a winter wrap and wish them luck for the upcoming winter.