This time of year most beekeepers are noticing that their honey is in various stages of granulation. Most new beekeepers are caught off guard and aren't really set up to deal with granulated honey.
I have spent the time after the holidays making a honey liquifier. I have finished it. I used a 31 gallon metal trash can. The can and lid are insulated with Reflectix insulation. The heater is a 100 watt incandescent light bulb. There is a thermostat that controls the internal temperature. The liquifier can liquefy five gallon pails or bottles (glass or plastic) of honey.
This heater can also safely warm up syrup or frames of honey. It really helps when adding honey to a hive when it is cold out, that the frames are around room temperature. Warm syrup can be taken down easier by the bees. Setting the thermostat at 80 degrees for syrup or frames.
The liquifier is made out of quality materials and is heavy duty. All you need is a 120 volt outlet. The liquifier is easy to move with the handles on the can. It stores easily and does not take up a lot of room.
I will be donating this honey liquifier to the MN Hobby Beekeepers Auction that is on Feb 1st. Check it out. If you are attending the auction, bring your checkbook.


This video was made by Jerry Linser who took all the pictures.

Bees have been in their winter cluster since late November. The bees have started winter in the box below the top box. The bees in most cases have consumed about two to three frames of honey since late November.
We are coming to the time of the season where bees make the transition into the top box of the hive. The top box should be mostly full of honey.
Remember last fall when I talked about having a partially filled frame of honey put into the center of the top box when overwintering a colony? As bees make the transition into the top box right now, having a partially filled frame will make this transition easier. The cluster will slowly start occupying the bottoms of a few frames of frozen honey in the top box. The partially filled frame will aid the bees into moving up a few inches on to the empty cells of the partially filled honey frame. There is no frozen honey on this frame, so it takes little effort to move up. The bees will then be able to warm the adjacent frames of honey for their consumption.
If all the frames were full of honey, the bees will have a little more effort to move up. Especially if it is very cold out. Don't get me wrong, the bees can still move up, but the partially filled frame makes this transition easier.
By the end of January most of the bees would have moved into the top box. The exception will be, if the hive was very heavy with honey. The bees may not need to move up yet because of an ample food supply.
No peeking yet. Your hive may have dead bees in front of the colony. This is normal. If a colony was weakened by mites, it is not uncommon to find the colony full of honey and empty of bees. Over the course of the winter the bees had dwindled down to an unsustainable cluster of bees.
At the moment there is nothing we can do to help the colony much. As we get into February, there is a few things beekeepers can do to help the bees survive. I will post those soon.
Right now lets think about a few things coming to a colony near you.
The queen will start laying in about a month. Pollen patties will be going on in about six weeks. Reversals in about two and a half months. Package bees in two and half to three months. It doesn't look like it, but spring is coming, before long the bee suit will be on and the smoker will be lit.
Posted by Jim at 5:45 PM

Why did package bees take a jump in price for 2020 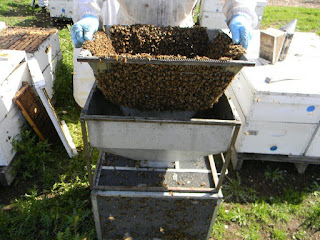 There was a price increase in package bees for 2020. This increase has to do with labor law in California. Workers for the bee industry are considered farm workers.
The law on overtime rules changed for 2020. The law used to state,  that farm workers got time and a half after 60 hours of work. The new law for 2020 now has farm workers in California getting time and a half after 40 hours.
During the package bee season, package bee producers are working their crews, 10 - 12 hours a day. Usually seven days a week for six to eight weeks.
So last year, the crews of workers were getting premium time for 10 hours a week in a 70 hour work week.
Now in 2020 the workers working a 70 hour work week, are getting premium time for 30 hours a week.
The package bee producers had two choices to make over this change in labor law. Either your crews work normal hours and reduce the amount of package bees you sell or, increase the price of the package bees and sell the same quantity of package bees.
The labor market for available workers is very tight at the moment. It is hard to get qualified people who want to put on a full pair of coveralls in 90 degree plus weather. Open up boxes of stinging insects, shake them into small boxes and send them to another state. Working all day, 70 hours a week, rain or shine.
Posted by Jim at 7:50 AM

I wanted to get a post out about our year with solar power.
The first question that is always asked of us is, Was it worth it? The answer is yes.
Our solar system has produced 16.28 megawatts of power. Or, to break that down, 16,280 kilowatts of power. If we are going to break that number over a day to day average. 16,280 divided by 365 days = 44.6 kilowatts per day.
The average home in the United States uses around 30 kilowatts of power per day. This can change as some households use a bit more and some use less. We did get rebates for our overproduction of electricity from Xcel energy. We received energy rebates from April through August bill. Rebates ranged from $46.00 to $137.00. Xcel also used the rebates on our gas bill.
Looking at the graph, solar collection is best in the month of June, with the longest days of sunlight. November and December are the cloudiest months of the year. February of 2019 had near record snowfall and affected the solar collection to a very poor performance. Solar panels need to be free of snow and shading by other objects to achieve their most power potential. We have been cleaning off the solar panels that are on our garage (18 panels).