Finishing up getting ready for winter 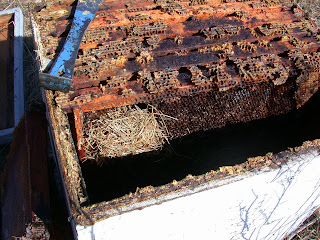 The mice will be looking for a warm house to live in. Entrance reducers usually will keep them out.

I am getting done with getting the hives ready for winter. Mite treatments will be coming off shortly.
Feeding will be done by Oct 5.
Other than that, not much happening on the bee front.
Winter covers will be going on in late Nov.
It is important to remember that the bees need a 1 inch hole in the top box for a winter entrance.
Next week the weather looks to start cooling off. Entrance reducers should be going in to keep out mice.
Posted by Jim at 7:02 AM

I received this e-mail:
Hello Jim,
Strong Carniolan hive. Fumagilin fed. Small amounts of bright orange pollen still coming in. I noticed an oval area approximately 4x2 inches in the middle of one frame in the lower brood box where the bees had removed the comb completely down to the white plastic foundation. Nothing like that in the Italian hive next to it. I cannot find a reference to this on line. Problem? Thanks for the time,
My reply:
Being this is the lower brood box, a mouse has probably snuck in and chewed up a frame. Eating the honey and/or pollen.
In the lower box there are less bees in there especially if it is cool out. They are more than likely clustering in the middle box on a three high hive. They will put the run on the mice while it is warm, but when it starts getting cold the bees won't even go into the bottom box, on a three box hive. A two box hive has less of a problem with this, due to the fact the bees are in that lowest box.

Now as the cooler weather comes in, it is time to put in the entrance reducers. They should keep out the mice. This time of year I set them at the large opening.
When it is in the 70's or if the hive is being treated with Apiguard I would not put them in. But as the night time temps start getting into the 40's the mice will start to move in.
Posted by Jim at 1:13 PM

I have been seeing quite a bit of high moisture honey.
To be grade A, honey has to be 18.6% water content or less. I have tested many samples in the 18.8 - 20% range. Honey above 18.6% will ferment with time.
When I bring my honey home I put it in my honey house with a dehumidifier running for at least a week. This will lower the water content before I extract it.
It is hard to get the water content down after the honey is extracted.
If this is not an option, always extract the capped honey first, then the uncapped. Keeping them separate, then check the water content. I do check honey moisture content for free.
Always stir honey if it has sat for a week or so. Moisture will separate in honey and the higher water content can lay on top of a pail. By stirring it before a sample is taken, will be a more accurate sample.
Posted by Jim at 5:15 AM

A great and interesting article

Check out this article Saving Bees . Some of the best bee researchers comment about the bee crisis:
http://roomfordebate.blogs.nytimes.com/2009/09/02/saving-bees-what-we-know-now/?apage=1#comments
Posted by Jim at 7:55 PM

Getting A Hive Ready For Winter 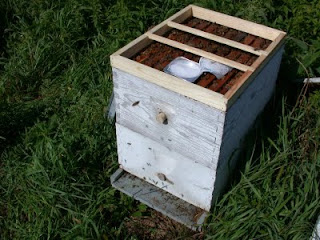 Treating a colony with Apiguard.

Now that the honey is off the hives it is time to get the hive ready to winter.
This is what has to be in a hive:
Top deep box, eight full frames of honey one partial filled frame in the center. The partial frame helps the bees move up from below later in the winter.
Middle or Bottom box (if in two deep), four frames of honey. Two on either side on the very outside of the box.
If a colony does not have this amount, it is time to feed. Feed 2 parts Sugar to one part water - heavy syrup. Feeding now gives the bees time to turn it to honey. If a colony isn't even close to this amount of honey they will not be able to survive the winter.
Bees eat about 12 - 14 pounds of honey a month in winter. Once Feb. hits that jumps up towards 30 lbs because of brood rearing.

I have pulled most of my honey off my colonies. It is time for a treatment of Apiguard.
Apiguard is a thymol gel treatment. Thymol is the safest mite treatment to use at this time. It also affects tracheal mites.
The treatment is two gel packs. One goes on for two weeks, then the second one is added for another two weeks.
Apiguard is temperature dependent, it needs temperatures in the 70's to work.
The sooner it gets put on the better.
Apiguard can only be used in the fall.
Posted by Jim at 5:03 AM