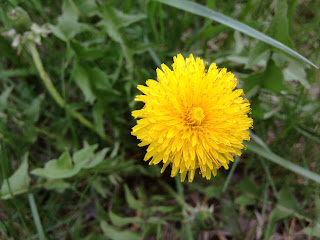 Dandelions are starting to pop open around the metro area. They are about right on schedule for their normal bloom time. Which is usually around the first week of May.
This is the first widespread nectar flow of the season. Strong colonies can put up a lot of dandelion nectar. Many commercial beekeepers try to time returning their colonies from Texas, California or other points south to right before the dandelions bloom. Returning their hives before the dandelions bloom can save commercial beekeepers thousands of dollars in feed costs. If the commercial beekeepers get back late, they may have to spend the money and feed their bees syrup.
Strong overwintered colonies should have supers on their hives right now. A good Dandelion flow can put up a super or two of Dandelion honey. Personally I don't care for the flavor of Dandelion honey, but there is a market for it.
New packages may cut back slightly on their syrup consumption when the Dandelions are out. But, beekeepers need to keep syrup on their hives if comb is being drawn out. New beekeepers with new equipment need to keep syrup on their hives until their boxes are finished being drawn out with wax. Sometimes that can mean feeding syrup until almost mid June.
Posted by Jim at 12:21 PM