Is the nectar flow over? 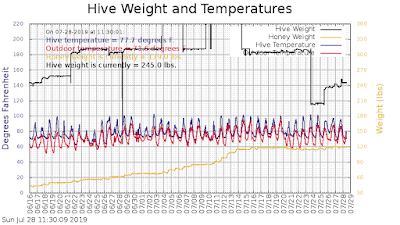 This scale is from paulsapiary.com. Paul keeps his bees in the east metro. He has a hive on a scale. This is his latest reading on July 28th. There was a good honey flow on for Paul starting around mid June. The flow slowly increased until about the end of June. The flow picked up in July at a pretty good clip. But by July 16th the flow has really slowed down considerably. He has put up about 80 lbs of honey into his hive. That is a little more than two medium supers.
There are other flowers blooming now. But time will tell if the nectar flow still has some legs or not. Just because the flow is slow or stopped in one location does not mean it has ended elsewhere.
There may be some more honey to capture. Make sure the bees have some empty frames. I would hold off adding more supers unless the present supers are mostly full and 2/3rds capped. If you move empty frames from the outside of the boxes to the middle of the super, the bees may fill them up easier than if you left them on the outside edges of the super.
If the bees have not put any honey into your supers their are only a couple reasons for that. Your bees swarmed, you had queen issues in late May or early June, there was not a good nectar flow around your bee yard.
Posted by Jim at 11:58 AM