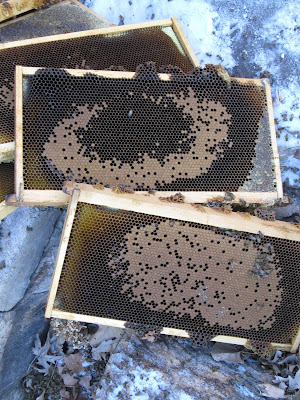 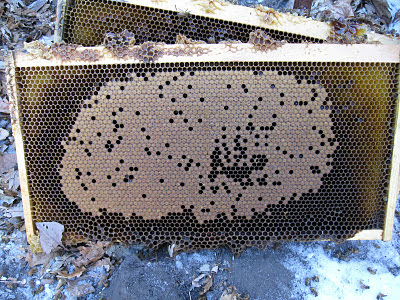 Brood in mid - January
Notice there is no or very little honey on these brood frames. The bees ate it all keeping the brood warm.

A beekeeper sent me these pictures. He had planned to kill off this colony. A two deep hive. The colony still had a top box full of honey. When he went through it he found more than two frames of brood in the hive. This is not a good deal to have this much brood in a colony in mid - January. If it was February it would be ok. Now the food consumption will increase dramatically. The odds of the colony eating themselves out of food are very high.
In Nebraska they were experiencing temperatures into the 50's and 60's. The beekeepers there are worried about a huge loss due to starvation.
The warm weather that was around for an extended period has many colonies around the state in this predicament. Not much we can do right now. Hopefully the bees can make it into Feb and then reassess the food stores.