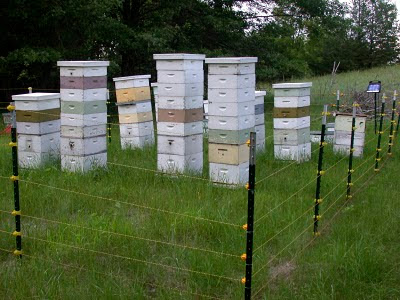 I have all of the supers I own on my hives. This nectar flow for many of us may be the best in many years. I have talked to many beekeepers who are experiencing the same.
Over wintered colonies are performing best but many of my packages are doing well. I have a few dogs that have not put up any honey but that always happens when you run 50 colonies. The dogs have either swarmed or gave me some queen trouble early on. It seems this year if the queen was ok and the hive didn't swarm most of the colonies are putting up some honey.
White sweet clover is still in full bloom in this area. Other flowers will still be coming. The second hay crop has been cut. We may see a third cut of alfalfa. So there may be more of that available in late July or early August with the good rain we have been getting.
A beekeeper called me to report he saw goldenrod starting to bloom west of the cities.
A past post about Growing Degree Days is coming true with August flowers blooming earlier than normal. How this effects our nectar flow is unknown but the way it has been going I am going to have to extract and put my supers back on.
Posted by Jim at 7:15 AM