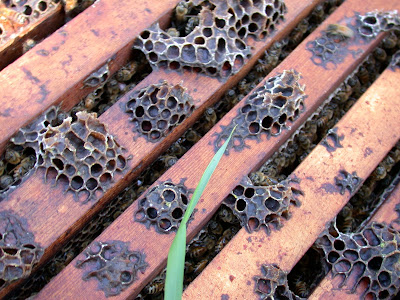 Notice the whitening of the burr comb edges. This is a good indicator the nectar is coming in. A look down into the tops of the frames may show the whole top edges white with new comb.

Now is the time to put on supers. Everything is pointing to an early start. I believe the plants are two weeks ahead of schedule.
My Basswood trees have opened their seed pods. This usually happens about the third week of June. They then flower around July fourth. I expect them to flower around the second to third week of June.
An old beekeeper told me that the nectar flow starts 10 days after the first clover bloom is seen. In my area that was about 5 days ago.
If you are drawing out foundation, when the bees are close to being finished, put on the supers.
The packages should be getting many, many bees. The are turning into a powerhouse of wax production.
The first box took three weeks to draw out, the second box 10 - 14 days. The third box if desired, will be drawn in a week or so.
Stay on top of this in case the nectar flow booms at the start. The bees will plug a hive up with nectar in a week.
It is better to put supers on early than to put them on late.
Dr Furgala said " You can't make any honey if your supers are in your garage".
Posted by Jim at 8:24 PM