It is the beekeeping season in California 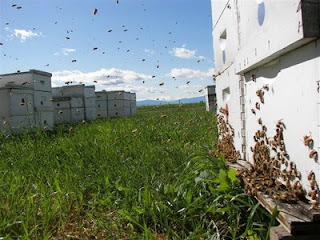 The first series of queen grafting has started. The pen like tool is called a Chinese grafting tool. It has a spring mechanism like a pen. The head is pushed down exposing a plastic "tongue". This tongue scoops up the larvae and royal jelly from the cell. The tool is put into the queen cup. Letting off on the head of the tool retracts the tongue and the larvae is deposited into the back of the queen cup.

Pollen patties have been on for over a month already. Feeding syrup is going strong. All of this helps spur brood production and the raising of drones for queen mating. Right now grafting has begun to raise queens for the spring season. 24 hour old hatched larvae is scooped out of a cell and transferred to a queen cup.
Posted by Jim at 8:41 PM