Overcrowded Hive, A Prelude To A Swarm click photo to enlarge 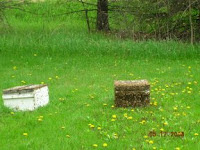 This hive is obviously overcrowded 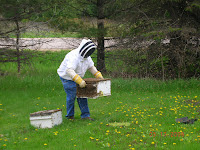 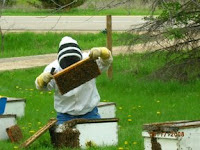 A quick check for swarm cell. And there was none. 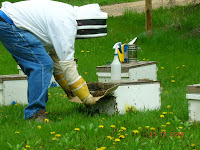 I scooped bees off the face of the overcrowded hive. 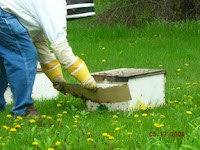 I dumped them in front of the weak colony They walked in a few minutes later.. Now I made two hives better and stopped a swarm that would have happened in short order.

I had a single box hive that was terribly overcrowded. It was a swarm waiting to happen.
This same technique I use when I have a hive with active swarm cells. I am talking a swarm cell with milk, not empty queen cups. Remove the swarm cells to stop the swarm, then move the colonies. Weak one where the strong one is, strong one where the weak one was. This way the swarm will stop.
Posted by Jim at 12:39 PM