This is a pic of an existing hive setup for package bees. The frames in this case,  are already drawn out comb, six mostly empty frames and three frames full of honey. I know the pic has only eight frames drawn on the box, put in nine. The ninth frame should be empty and go with the three empty frames in the middle of the hive. I would still feed one pail of syrup. The bees will put the sugar syrup where they want it, around their new brood. After that one pail of syrup, I would not feed. There is ample honey in the hive for a month. A pollen patty needs to be put on the top bars. Move the frames of honey indoors a few days before the bees come, so the honey frames are warm.
Giving the bees cold frames of honey, may not be  good idea. 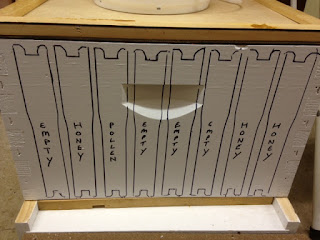