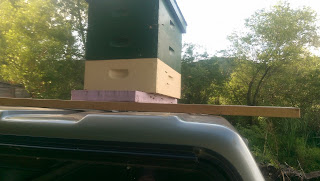 I had a customer call me to tell me his bees had swarmed and were high up in a tree. I told him that he needed to get a hive box as high in the air as he can.
He really didn't have a deer stand so he elected to put the hive boxes on top of his truck. The truck was parked near the swarm tree.
Within an hour the swarm had found the hive box and had moved into the hive.
A shout out to Trevor, nice move on catching the swarm.