Draft Wheel at the Smithsonian

This is a draft wheel. It is about 6 feet tall. Names of possible draftees were inserted in small holes on the wheel. The wheel was spun and names were drawn for soldiers to be drafted into the Union Army during the Civil War. Using a draft wheel was a common practice around the country in the north and the south.
The last draft we had a was during the Vietnam war. Many people have forgot about how it worked. Balls were drawn with month then date. The first date was 001 and the last 365 on the draft list. All nineteen year olds were eligible to draft. The military figured how many men they needed and for example would draft through number 125. All the men whose birthdays were the first 125 slots would be drafted. The rest would not be drafted. The following year a new draft was held with the new pool of nineteen year olds. When I was nineteen, my draft number was 083. 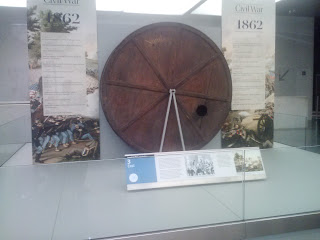