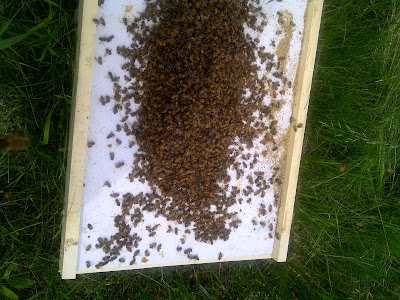 This colony unfortunately has starved. They consumed their stores of honey and the flow has not started yet for many of us. In a normal season this would not have happened. It appears many beekeepers are getting caught off guard to their colonies starving out.

I have talked to several beekeepers about their hives not building up. As the conversation continued a common thread emerged. They had stopped feeding.
Two of the beekeepers had a lot of brood but there was no new comb being built. Also the nectar that was in the second box was gone. I told them that they are on the verge of starvation. The big nectar flow has not arrived for most beekeepers and we have to watch the food stores. Another beekeeper after some discussion had his new package swarm. They were in two deeps with two drawn frames in the top box. No nectar coming in, rainy conditions, a forlorn outlook for the hive. Swarming to them was a good prospect for bluer horizons. The bees are into survival so when conditions are bleak they will react.
Feeding is a must when drawing foundation. The feeding schedule is feed until the comb is drawn or the nectar flow starts and the bees stop taking syrup. On drawn comb colonies, it is imperative that enough food is available. It is also important not to overfeed but two frames of capped honey in a colony is a good number to maintain leading up to the nectar flow.
The cold weather we have experienced has caused the bees to cluster. The bees are trying to keep the brood warm and getting to honey stores in a colony becomes a little more difficult. The spring build up this year has been tough for many beekeepers. Hives have been having problems expanding the brood nest. Populations have suffered and many colonies have not been able to build to a strong hive. Hopefully some 80's will come by next week for a sustained period.
Posted by Jim at 11:34 AM