This is a graph of a hive started at Warner Nature's Center. It was a 2 lb package that was installed on a scale. The package was installed with a feeder pail on and a pollen patty. There was some honey in the hive. The scale was then zeroed.
The weight is on the right. You can see the hive was at a negative number from were it started due to the feeder pail being off and honey consumption. It starts in early June at a negative 12 lbs from the start of zero.
You can see the graph creeping up. Notice the rise and fall of honey weight with the daily temperatures. There are minor honey flows going on in early June. As the temperature goes up so does the weight of the hive with new nectar coming in.  The weight goes down slightly overnight as water is evaporated from the nectar and the consumption of the nectar by the bees themselves.
Notice on the graph 6/15 it is clear the main nectar flow has started at Warner Nature's Center, which is near Square Lake in northern Washington County.
From 6/15 to 6/27 the hive has increased its weight by about 35 lbs in twelve days. That is about the amount of honey of one medium super.
Warner Nature's Center has open fields nearby and has a good amount of trees. It will be interesting to see if the weight goes up much when the Basswood trees open. As of today the Basswoods have not flowered in our rural area. That should change any day now.
The inside hive temperature fluctuates around 5-7 degrees while the outside temperature has a 20 degree swing between night and day. 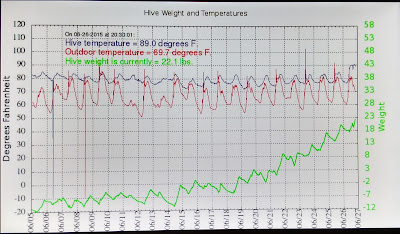 Scale data and photo by P. Liedl a beekeeper from Warner Nature's Center
Posted by Jim at 7:57 AM