The bee season in review

The latest bee season was a tough year for beekeepers. Definitely testing long term beekeepers resolve.
Wintering success was pretty much average for many beekeepers.
Package bees across the whole country were delayed due to cold weather affecting the ability to breed queens. Queen breeders had good populations of bees but the weather did not accommodate. All the packages were delayed two weeks from their expected delivery dates. Queen deliveries for splits around the country also were delayed. I was fortunate that my supplier was able to give me queens for splits on schedule.
Cool weather persisted all spring. Many overwintered colonies were not able to build up to a dividable colony because of the cold. Hives could not expand their brood nests because they were in a tighter than normal cluster. This kept bee numbers down until into early June before many hives were ready to split.
Package bees while they came late, they were able to build up to a strong hives. There were some bumps in the road though. The cold weather delayed many sources of pollen. Most beekeepers stopped feeding pollen substitute by mid May. While this is a normal time line. This year was different. Pollen was in short supply until almost mid June. Some beekeepers had what they thought was queen failure in late May and early June. The problem was no pollen coming in and queens stopped laying. Putting pollen patties back on immediately fixed the queen problems. The bees gobbled up the patties with a vengeance.
Normally our main nectar flow starts around the third week of June. This year it came late. By this time overwintered colonies were getting big populations. Many were not divided because they were too weak. Now they were ready for the nectar flow. But the flow did not come until July.
So here was the setup. Strong overwintered colonies, old queens in the hives because they were not able to be divided. No nectar flow when the bees were ready. Result, the bees started to swarm, and boy did they swarm. There was also starvation of overwintered colonies. Beekeepers were caught off guard thinking that the nectar flow was going to start and did not watch there honey stores. Strong colonies dropped dead from starvation because of no nectar coming in and beekeepers not realizing what was happening.
Package bees on the other hand, once the pollen started coming in, had the time to build up because of the late flow.
The nectar flow started in July. For the most part there was no Basswood flow. My Basswood trees did not even bloom. The Basswood flow, if it flows, usually brings in large amounts of honey to most beekeepers.
The nectar flow that finally arrived was spotty to almost non existent. Many commercial beekeepers had terrible honey flows. Reports of hive averages of under 30 lbs per hive. Beekeepers in the east metro seemed to have a better season than the west metro and western MN. There were some beeyards that had good honey flows but most did not.
How did the bees react to the poor nectar flows? They swarmed.
I had swarm calls from the general public from late June into Sept. Some beekeepers had bees completely abscond. This usually happens when a hive thinks the outlook for survival is bleak and they pull up stakes for a fresh start.
This was probably a bad decision on their part but they did it anyway.
Then out of the blue Goldenrod starts to bloom. This was the first time in over ten years that I actually got Goldenrod honey. My beeyards smelled like wet sweat socks. That is how I knew the Goldenrod was flowing. The Goldenrod flow saved the butt of many of us for getting some excess honey and winter stores.
Even with the Goldenrod some beekeepers did not fill up their hives.
Winter food stores were not in the best shape in many colonies. Beekeepers had to feed early and often to get their hives in shape. Some colonies were eating the syrup as fast as it was coming in, making getting hives to winter weight a little more challenging.
Now it seems many beekeepers were reporting low mite loads and with that the outlook for wintering looks good. Most hives seem to have good populations. The beekeepers that were able to get adequate food stores into their hives should hopefully have good wintering success.
The long term weather outlook is more snow than average and cooler temperatures. If the deep snow comes early will be a good thing, the snow will cover the hives and give them an added blanket of insulation.
This past year was definitely a tough year to keep bees. I think many of us are looking for the year ahead and a "normal" beekeeping season.
Posted by Jim at 6:30 AM No comments:

I have received 5 reports of bears tearing up colonies around northern Washington county in the last two days. Two might be the same bear but the rest were not.
The only thing that stops bears is an electric fence with six strands of wires. The bear that nailed my yard got through on a wire that had broken, I found out. I might have nailed it with my weed trimmer.
No electric or poorly maintained electric fence is an open invitation to a feast that is bankrolled by a beekeeper.
Anoka and northern Washington county is bear country according to the DNR.
Also as far south as Hudson on the Wisconsin side of the river.
Posted by Jim at 1:21 PM No comments:

Getting the hive ready for winter

One last hurrah before hibernation 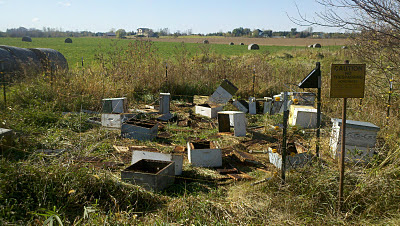 The bear came back with a vengeance. Beat up my bear fence.
Posted by Jim at 8:19 PM No comments:

Now the hives are fed and medicated I am waiting for the cold weather to hit before covering my bees. I usually wait until Thanksgiving weekend to cover the hives. If it is going to snow several inches before this time I will cover before the snow hits.
Wintering minimums,
Wintering bees is always a challenge. Doing the right steps can help increase the odds of colony survival. A colony that survives the winter usually can be divided in May and will produce much more honey than a package of bees.
Posted by Jim at 6:50 AM No comments:

I have received several reports of beekeepers getting hit by bears. Bears are on the move and looking for some easy food before hibernation. A beekeeper about a mile west of me had a bear trash several colonies and many supers of honey. Bear fences do work and they can save your bees. Thinking your dog or the hives are close to the house will stop the bear, just won't happen. They are persistent and will keep coming back.
Posted by Jim at 4:56 AM No comments: