Beekeepers are getting in their last chores of the season. Making sure a colony has sufficent stores for winter survival is one of the last hurdles to cross for getting the hives ready for wintering. A colony of bees eats about 12 lbs of honey a month. This is about a frame and a quarter of honey. When brood rearing starts sometime in February, the honey consumption will increase. We can feed syrup again in early March, so that is our target for food stores. While this is a general rule of food consumption, use of stores can increase or decrease by the size of the overwintering cluster.
For wintering we would like the following, if you have checked them off already that is a good place to be.
How to feed fast: 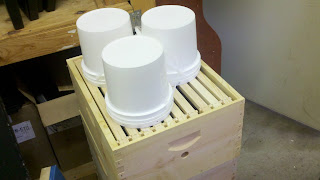 Three feeder pails can be put right on top of the frames this time of year. The bees will drain them in about 3-4 days. Cover with and empty brood box and inner and tele cover.
Feeding with a top hive feeder:

Feeding needs to happen now. Feed fast and get it done. The longer we feed, the longer brood is in the hive. The longer brood is in the hive, the more mites we get. Feeding spurs brood production. Get the feeding done. We want the queen to stop laying, so when we treat with oxalic acid in late October, hopefully the hive will be broodless. With a broodless hive, all the mites that are left in the hive are on the bees. The oxalic acid treatment will put a serious hurt on any left over mites. Then the colony will be ready for the rigors of winter.
Posted by Jim at 8:54 AM